THE BULLY SOCIETY: School Shootings and the Crisis of Bullying in America's Schools 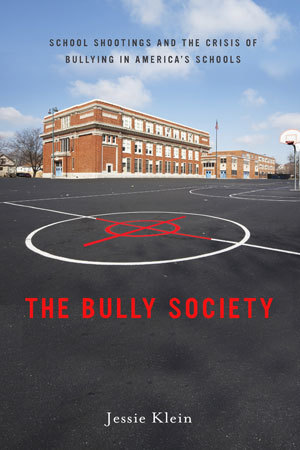 Twelve years after the Columbine High School massacre, school shootings have gone from a rare, shocking aberration to a frequent, yet still shocking, tragedy. Despite ubiquitous zero-tolerance policies, school violence continues. Even if they’re not getting beat up or shot at, students routinely endure verbal assaults and torment from other students—often as school faculty look the other way, or worse, join in. For many children and teens across the country, school feels like a hostile, oppressive, and dangerous place. Why has vicious bullying become commonplace in schools?

The Bully Society: School Shootings and the Crisis of Bullying in America’s Schools delves into the roots of school violence in all its forms, from “everyday” bullying to shooting rampages to the alarming rise in adolescent depression and suicide. To get to the core of bullying, I draw on extensive studies and firsthand interviews with both targets and bullies in schools from rural, inner-city, and wealthy suburban communities; I also share my experiences with these issues from the two decades I’ve worked in schools and universities. Throughout, I tell the stories of men, women, and children who suffered — emotionally, psychologically, and physically —because of school culture norms. Backed by hard-hitting statistics and haunting personal accounts,

The Bully Society reveals how students get the message, from the media, as well as their parents and teachers, that status and power are everything; boys learn from an early age to assert manhood by wielding power over girls, while girls are increasingly pressured to be tough too, and to use violence to prove themselves; surprisingly, teachers and parents often contribute to the bullying problem even when they are trying to ameliorate it. What can concerned educators and parents do to stop this hurtful yet widely accepted pattern of behavior? In The Bully Society, I discuss the steps necessary to transform debilitating school cultures.

I share successful school-based efforts, where teachers are working to bond with students and help them become leaders in creating a caring school environment; students then reach across ethnic, economic, social, cultural, and gender divides to create authentic connections among one another; in this way students finally replace the jockey for popularity which comes at the expense of building true friendships. Rather than focusing on identifying a “troubled teen,” I suggest that the goal is to diagnose disturbing values affecting the school; schools need to commit to building a culture of acceptance, where students can develop their potential, contribute to their communities, and connect meaningfully with other people. I believe that change is possible in our schools. Together we can move from a destructive one-size-fits-all bully society to more compassionate communities—where students, families, and community members can finally thrive.